I’m beginning this venture of a scholastic-ish blog with, of course, the one story that everyone and their mother has written about. 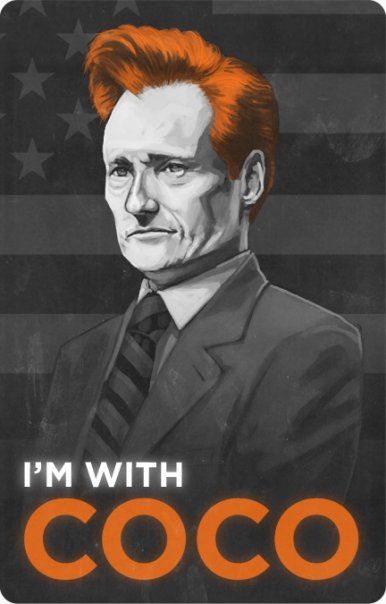 There are so many opinions about the “late night wars” that it seems almost impossible to have an original one.  They’re already out there, often expressed by those in the imbroglio themselves.  Regarding fault, the opinions range: Leno’s just a company man who’s sticking with the myopic NBC (that’s Leno’s image of himself); Leno’s a schemer who is repeating the underhanded dealings of the early 90s (Letterman‘s opinion); NBC is justified in canceling Conan because of his poor rating (the “it’s just business” NBC line); and every iteration/combination of the above.

I am undeniably on Team Conan, but I am savvy enough to understand that he’s not just a martyr in this situation.  Annie Peterson, a fellow grad student (and inspiration for my shift to this format of blogging) does a great job of covering why so many people have joined in supporting Conan.  I encourage everyone to take a read, but her point boils down to this: We like Conan, more specifically, the idea we have of Conan.

I say that Conan was “undoubtedly wronged” because that is how he has been portrayed and will be remembered regarding this fracas.  Jay Leno continually tries to portray himself as the victim of NBC’s machinations–implying that he was strong-armed to retire, calling The Jay Leno Show‘s fate a cancellation,  joking to his (overwhelmingly supportive) audience on that show that he’s now been fired twice from NBC.  While perhaps technically true, these aspects will not stick to the public persona of Jay Leno because he is getting exactly what he wants at the expense of Conan.  (And just today, to add a cherry to the sundae of Jay Leno’s career victories, it was announced that he will host this year’s White House Correspondents Dinner.)  It’s tough to play the victim when everything’s coming up Leno.

First Cody had to compete with Wolfboy then the Blind Side. You can understand why he broods.

Cody’s segments always contained the same elements: Cody is obsessed with someone or something he can’t have, faces either competition or reality, an over-the-top ballad plays (“I’ll love you forever / Never saying goodbye”), and Cody runs crying outside to the sunlight (no sparkle for him; he dies).  Silly silly stuff.  But, it’s smart too because it’s satirizing both the Twilight phenomenon and the shoehorning of vampires or Twilight-like elements into various productions as a clear ploy for the Twilight audience.

Of course, Conan’s intelligence (and I realize I’m conflating Conan-the-person with Conan-the-show-written-and-produced-by-a-team, but that ties back into the fact that I’m discussing the idea of Conan; he is his show to a certain extent) often leads to the label of elitism, which is why I’m so curious about both the generational and class explanation of motivation behind Team Conan.  Mike Mitchell, who drew the header image, likens Conan to “a lot of people [who] have crappy bosses” and can thus “relate.”  This implies that Team Conan is tapping into the angst and anger of the workers–those of middle and lower classes.  But Conan as a working-class hero is too simplistic, especially as most assume the Leno has the support of “middle America” which is often classed as blue-collar.  The spanner in the works here is the generational argument: Jay Leno is a baby boomer, Conan is the voice of Generation X.  Leno is popular with–and thus represents in the popular imagination–blue-collar (when blue-collar was middle class) boomers.  Conan, however, appeals to and represents a different image of the middle-class: a young, white-collar, educated middle class.  They’re cubicle workers who have grown up with the internet for a majority of their lives.  They torrent, they stream, they DVR, time-shifting in ways that upend the standard measurements of viewership and ad-revenue.  The whole Leno vs. Conan debacle can be read as entitled boomers refusing to relinquish their position of power and importance the the next generation that do things so differently that the boomers can’t even see that they exist on the same spectrum.  All of this applies mainly to white America, but it’s still a divided idea of America, even within one racial and class bloc.

My opinion?  The system of ratings is fundamentally flawed as the basis for television revenue; technology is surpassing the business model.  The drop in Conan’s ratings from Leno’s at 11:35 ET  resulted from a perfect storm of problems: the generational gap regarding who watches TV how; the ratings failure to reflect alternate viewing practices; the general downturn of ratings at NBC and the specific downturn at 10pm due to Leno’s show that led to a 50% drop in local news ratings, the direct lead-in for Conan; Leno stealing the publicity momentum as well as some guests (Kanye couldn’t have gone on The Tonight Show to apologize to Taylor Swift?  Maybe it could have been Conan’s “What were you thinking?!” moment); and even Conan’s drive for excellence creating an uneven first few months.  NBC is to blame, Jeff Zucker specifically, and Leno is tarnished (though perhaps not in the eyes of his core audience).  Team Coco got an amazing two weeks where almost everything that was thrown against the wall stuck and was seen by more people than usual.  Conan keeps his outsider quirkiness–hopefully soon to be put to better use outside such a venerable institution– and Team Conan gets the high ground.

*Or at least as good as, for it is widely believed that that character falls under the agreement that ALL of Conan’s characters and bits created while at NBC is the intellectual property of NBC.

UPDATE 1/23/09: For further evidence of the generational motivation, The New York Times Media Decoder blog is reporting that Conan’s final show drew an astounding rating among the desired 18-49 year-old demographic.

More impressive was the number for 18-to-49-year-old viewers — the gold standard for NBC because advertisers seek to reach that audience. There, in overnight numbers from the country’s 25 largest cities, Mr. O’Brien hit an extraordinary rating, a 4.8.

Not only would that be by far the biggest rating in that age group for any kind of show at any time Friday night (if it holds up as a national rating and it will likely decrease only slightly), it is also a better number than almost every prime-time show that has appeared on NBC this television season.