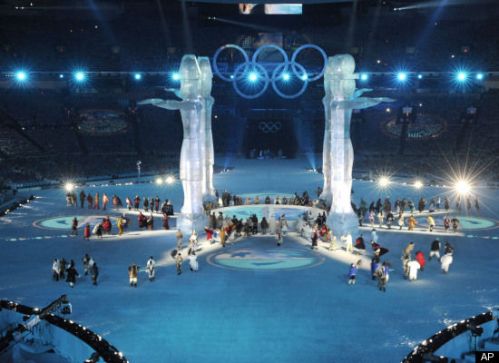 Within ten minutes of last night’s opening ceremonies, I knew I had to write about them, but I didn’t know what exactly it was that seemed so interesting to me.  I’m still kind of stuck in an admittedly reductive dichotomy of analysis: If Beijing’s opening ceremonies were an intimidating show of might, precision, and sheer numbers, then Vancouver’s ceremonies was about inclusion, intimacy, and telling a surprisingly quiet story.  While the former highlighted spectacle, the latter incorporating the spectacular into a narrative.  My initial thought remains: Beijing was a “jock,” and Vancouver is a “nerd.” 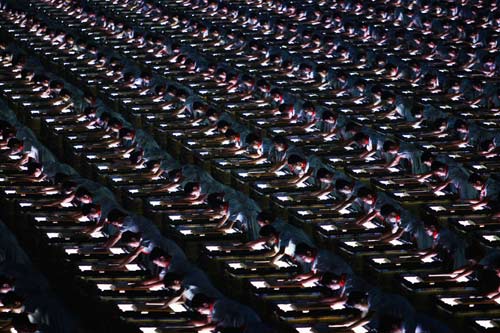 Jocks are certain of their power (Beijing opening ceremonies)

The Jocks vs. Nerds metaphorical dichotomy has been a part of American popular discourse for quite a while, it came to the fore within the discourse surrounding Barack Obama, who many bloggers and comedians refered to as the first modern nerd president.  John Hodgman delivered a speech at the 2009 Radio & TV Correspondents’ Dinner to such an effect and in it he laid out the differences between jocks and nerds: it’s a difference in philosophy, those who approach the world from a position of certainty versus those who approach from a position of scrutiny.  Jocks operate on a level of assumption of the narrative: the story is true so they act from there.  But nerds question those assumptions, creating new or alternate narratives, and often these stories directly address the hegemony of the jocks.  Nerds produce narratives of the undervalued and marginalized, seeking inclusion and tolerance because they understand the power of narratives and instability of the narrative.

The inclusivity of the Vancouver opening ceremonies was striking.  Last night began with a number of indigenous nations of Canada offering traditional welcomes.  The attention to the native peoples of Canada and the iconography of the western tribes was present throughout the production, but the Vancouver ceremonies’ inclusivity was not limited to racial terms.  There was a great emphasis placed throughout of the various streams of history that comprise Canada, cementing the national spirit as multi-valent: native peoples, Québécois, Scottish and Irish immigrants, youth, rural, and metropolitan citizens.

The beauty and magic of nature was the foundation on which this multicultural multi-valency found purchase, and as a result a cohesive–if bricolage–narrative formed: a poetic story of movement in Canada through space, time, and the seasons, beginning with the indigenous welcome and passage across the ice and moving through the coasts, the forests, the plains, the rivers, and even the cities,  David Atkins told the story of modern Canada.  What is most striking about that narrative is how quiet it turned out to be.  While certainly there were spectacular elements, they were used in aid to the story being told.  The difference between spectacle and spectacular elements within a narrative is a fine one that I need to clarify.  A moment of spectacle pulls the audience out of the narrative whereas spectacular elements can heighten the tone of the narrative.  When you see a giant forest take shape, it is spectacular in that it takes you somewhat out of the narrative in awe of the technology, but when that awe is the desired emotion of that moment of the story, it maintains the narrative.

Atkins used myriad projectors to “paint” his various settings onto the floor, hanging fabrics, and even the audience; it is a strategy that–with the various modern dance scenes–turned the opening ceremonies from spectacle to theater (a home for many many nerds).  Often while watching, I felt like I was watching dance theater, with modern dancers frolicking in a set of trees, or fiddling tap dancers mimicking the crackles of the dried maple leaves they were dancing on.  But the dances were telling a very distinct story of a people, place, season, and time in addition to the spectacular nature of the set or the dance.  The fiddling tap dancers notwithstanding, the stories told were humble and quiet: a lone boy wire-dancing to Joni Mitchell over fields of golden grains, Orca and salmon swimming and transforming into the aboriginal symbols, and perhaps most nerd-ish, a modern poetry recitation.

All this is to say that I found the Vancouver Olympics opening ceremonies daring in their embrace of inclusivity, theater, and narrative over monolithism and visual and technical spectacle, in embracing their inner nerd.

(Further proof that the Vancouver games appeal to nerd-dom?  Their mascots are mythical creatures, including the Sasquatch, a totem for many young hipster nerds.)

This entry was posted in Uncategorized and tagged Canada, inclusion, narrative, nerds vs. jocks, olympics, spectacle, tv. Bookmark the permalink.

One response to “Olympics Opening Ceremonies: Spectacle, Theater, and Jocks vs. Nerds”